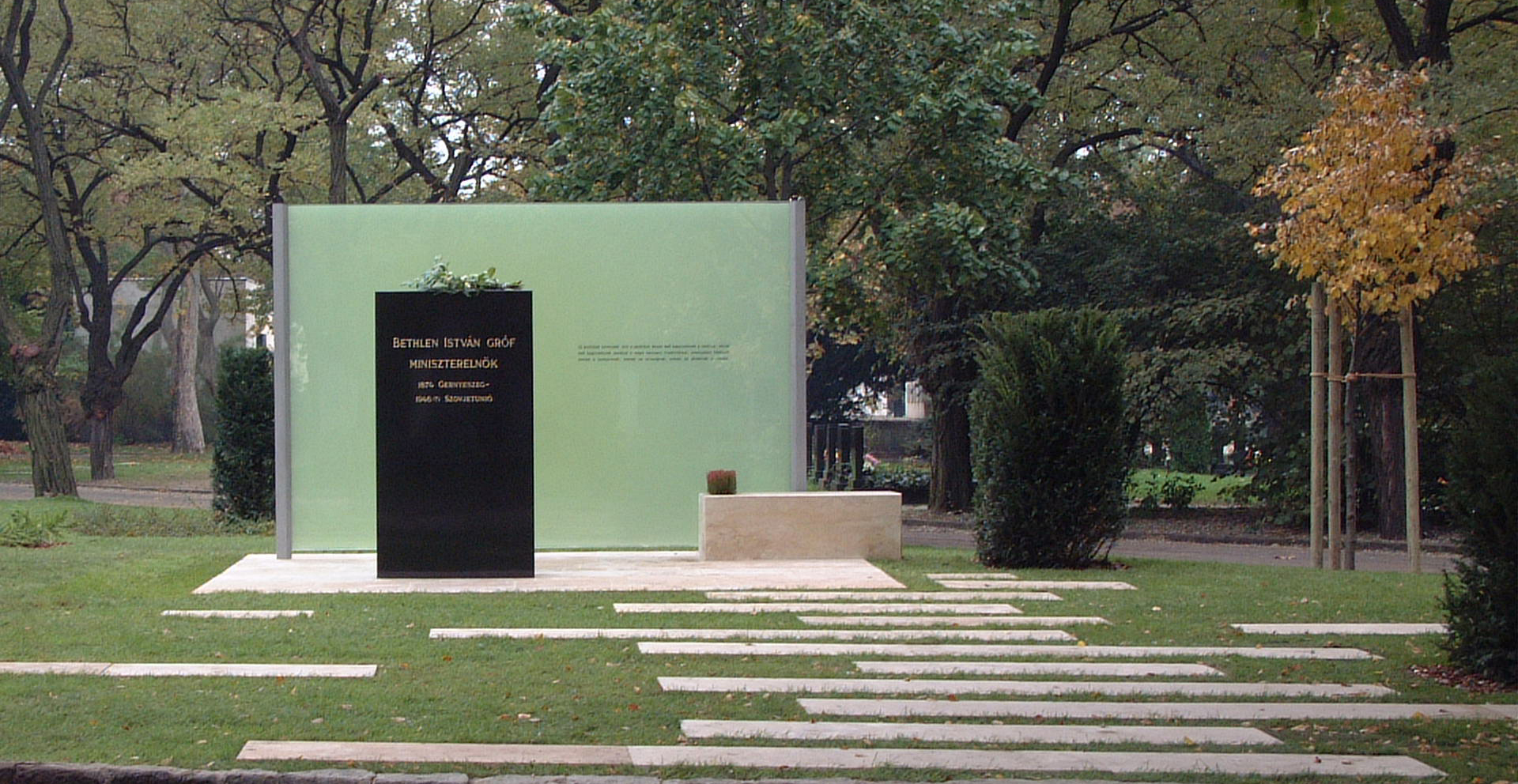 Count István Bethlen  (1874 – 1946) was one of the most significant personalities in Hungarian politics between the two world wars. In 1918 he was the central figure of the counterrevolution, and the leader of the Anti-Bolshevik committee in Vienna. In 1920 he was the head of the Hungarian peace delegation, and from 1921-31 the country’s Prime Minister.  At the start of 1945 the Soviet authorities arrested him and took him back to the USSR, where he died in 1946 under mysterious circumstances. *

His remains were brought back to Hungary in 1994 and was buried in Kerepesi Cemetery, plot 12/2, with highest military honors. Kerepesi Cemetery is one of Hungary’s oldest intact cemeteries and represents one of Europe’s most complete „National Pantheons,” where most of the country’s major historical, intellectual, scientific and cultural figures are buried.

The government, as part of protocol, places a wreath at the mausoleum each year. Most visitors to the site enter from the west, that is, from the main gate, and proceed along the northern side of the 12/2 plot. Bethlen’s new headstone replaces the old marker, but according to tradition, it is turned at a 90 degree angle to the nearest (that is, the north side) walking path. This means that visitors to the area easily see the burial place of the onetime Prime Minister.

Bethlen’s grave is on a human scale, thus it is not its size but rather its materials and their high quality, as well as the composition, that impart it such nobility. The refined, simple forms, the noble (and until now, less-frequently used in gravesite) materials, as well as the striking contrasts, are what underline the significance of the site.

The main conception of the site was to incorporate the sun into the composition. The tombstone itself is a regular black granite block, with a matte glass wall behind it that measures two by three meters.  The glass wall, when the sun is shining, collects the sun’s rays and creates a dramatic contrast with the black stone block in front of it. When the sun isn’t shining the glass wall provides a silky, subtle light that provides an interesting background to the granite.

Around the tombstone is a single, ten-square-meter limestone paving, which provides sufficient space for visitors to the burial site. In the shadow of the glass wall is a stone bench, with a vase inserted into it. The stone bench’s placement suggests a sort of temporal movement, which counters the permanence of the gravestone and emphasizes the momentary rest there of visitors. One of the determining factors in deciding the measurements of the gravestone was that the stone bench would be an accessible place for visitors to rest, and that its measurements be in accordance with human proportions  (155/85/35 cm).

Approaching the gravestone is done by crossing ’swimming’ stones. The layout of the paving stones broadens the venues for approach and counterbalances the rigid perpendicular order of the site. Of course, it is also measured out on the basis of the average human step, and means the site is accessible in bad weather as well. The spatial composition of the plot was guided by two perspectives – staging a contrast with the (communist) János Mics tomb in the opposite direction at the south end,  as well as keeping a neutral effect on the surrounding environment. Thus, the site should not dominate the whole area and there would be future possibilities for siting other memorials here.

The unified planting elements were meant to suggest a balance and equality, and something of a monochrome quality, against which the burial site would be even more striking. The vertical column-like elements are uniformly pruned yew trees (Taxus baccata),  accentuated with ground cover. Only the south corner of the plot diverges from this unity, which not only symbolizes a physical but also an ideological departure. The plot, in spite of being surrounded by trees, in terms of horizontal height appears opened and transparent, an atmosphere of commemoration and celebration.