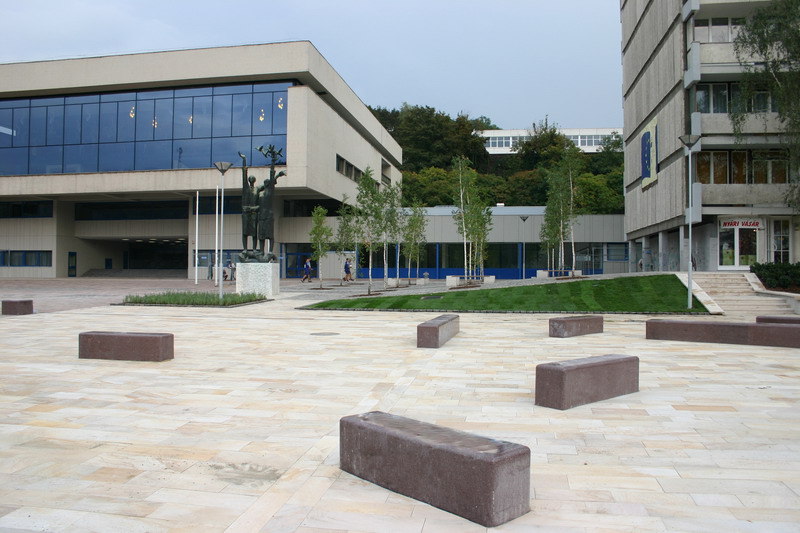 Salgotarjan’s town center is a fine example of the modernist urban construction of the sixties, which received the Hild Award of the Hungarian Urban Planning Institute in 1968. The renewal of the city center is inevitable due to the spatial structure and the changes in the urban fabric. The first step was the reconstruction of the main square in the central area of nearly six hectares. In contrast to the space in the city’s life, new demands have emerged, and the built-in materials are worn out. Throughout the city center, the renovation of the open spaces was started by attenuating through traffic, by renewing the public spaces’ envelopes, by reconstructing and increasing the green area. The rehabilitation plan, while maintaining the values of classical modern architecture, sought solutions that suited today’s spatial planning and space requirements.

The structure of the “neomodern” style square responds sensitively to the decisive masses of the surrounding modernist buildings. The axis of the central square is defined by the Cultural House designed by Gyorgy Szrogh (1962-66). The counterpart of Karancs Hostel (Gyorgy Janossy and Jozsef Hrecska , 1961-64), which towered over the square, contrasts with the raster block-like group of trees giving the background of the liberation monument preserved in its original place. The smaller part of the square in front of the statue is organized by the decorative pool closing the stepped down block of the Pécskő Department Store (Jozsef Finta 1968).